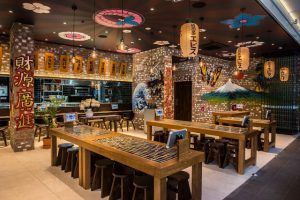 Bistros first originated in Paris before spreading to many other parts of the world. They are small and relatively inexpensive restaurants known for serving simple but tasty meals, usually accompanied by an alcoholic beverage or coffee.

There are a number of theories regarding the etymology of the word ‘bistro.’ According to one of the more interesting theories, the word was coined in the wake of the Napoleonic Wars when the Russian army briefly occupied Paris.

Some etymologists believe that the Russian soldiers were displeased with the slow services in most Parisian cafés, prompting them to shout ‘Bistro! Bistro!’ – which in Russian means ‘Hurry up!’

According to this theory, the French then adopted this Russian word for the name of these small and informal eateries. A memorial plaque in a Montmartre café commemorates this interesting theory.

Other etymologists, however, dispute the notion that the word was first coined by Russian military occupiers. They insist that the word existed in France long before the brief Russian occupation of Paris.

Rather, they say the word is derived from the word ‘bistraud,’ which in the Poitou dialect of French refers to a waiter’s assistant responsible for serving wine to café customers.

Still other etymologists point to the French word ‘bistrouille,’ which means ‘cheap alcoholic beverage of low standard.’ They note the fact that the word ‘bistro’ was already in use before the Russians occupied the French capital.

The word made its first appearance in English and Italian in the 1920s and 1930s, respectively. Since then, cafés and restaurants around the world have adopted the word for their own eating establishments.

Regardless of the word’s exact origin, the bistro remains an integral part of French culture to this day. Like the sidewalk café, the modest but popular bistro will always be a hallmark of the Parisian cityscape.